Gabrovo is situated in the center of Bulgaria, at almost identical distance between its north, south and west frontiers.
Being a natural crossroad between East and West, Mediterranean and North, these lands had been populated by different people. The village, successor of which is present Gabrovo, is created right after Tarnovgrad is turned into a capital of the second Bulgarian state. This had determined the way of life and occupation of people from this region. Crafts and trading had been fast growing, new productions had grown in connection with services and keeping of the passage.

An old legend had it that one of the first inhabitants along the Yantra river had been a young blacksmith, named Racho, who had shoed the caravans, passing through the mountain. Some other people had gradually occupied the place around. They had been sewing clothes, preparing tasty dishes, processing leathers. Village had been called Gabrovo for a big hornbeam had been situated near the fireplace of the blacksmith.
As time had passed, Gabrovo had become famous for its masters. Water had become a main source of energy. Alongside the steep mountain ridges, pretty creeks had let downwards and turned into small rivers which formed the Yantra river. Number of tooth – wheels in the town during C 18 & C 19, is indicative for the crucial role of the river; the quantity of washed wool, used in making homespun, braids and cloths, number of leathers, processed in its waters. 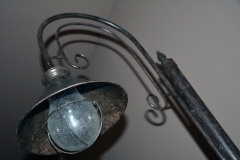 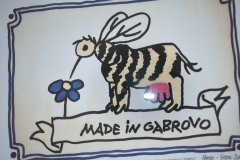 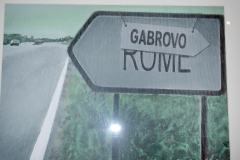 One after another, almost thirty crafts had raised: braiding, homespun tailoring, leather processing, jewellery, fuller’s trade, pottery, woodwork, sewing and many others. A wide dimension industry had been grown up out of the already existing small productions. Textile industry had grown up – wool and cotton, as well as leather and iron processing.
Trading had been also gradually developed. Cabmen and traders had been travelling to Russia, Wallacian, Austria, Hungary and Italy, thus touching unknown cultures and people and getting a high education for that period as well as a good social statement. Thirst for education had fast grown up and in 1835 the first secular Bulgarian school had been founded here.

In 1860 Gabrovo had been declared a town by the Turkish administration. Local inhabitants had been among the first participants in the battles for independence of Bulgarian Church and the National Liberation. During the Bulgarian – Turkish Liberation War from 1877 till 1878, Gabrovo natives had established a volunteers battalion and had ensured food for the Russian troops, as well as for the thousands of refugees from the south part of Bulgaria.

After Liberation, Gabrovo had become among those towns that founded Bulgarian government. Gabrovo citizens Ivan Giuzelev, doctor Alexi Hristov, Raycho Karolev, Sava Sirmanov, Nikola Saranov and others had been among the first deputies of the constituent assembly and some of the most active members in statement of Tarnovo constitution. Todor Bourmov had been the first prime minister of Bulgaria, and Ivan Giuzelev and mayor Konstantin Popkonstantinov had been among the first ministers of the new state. Deputies from Gabrovo had been initiators of many laws, which supported local industry and it was obvious that the town had been well known for its quality goods and leadership in many manufactories – weaving, leather industry, passementerie, etc. They called it a capital of factories, Bulgarian Manchester, the Creditor of Bulgaria.
The wide pallette of crafts had admitted satisfaction not only of local needs, but it gave an opportunity for spreading trading amongst the whole Ottoman Empire, and since the middle of C18 in other European countries as well. The town had become famous for the economy and wit of its citizens and for this reason the only museum in the world, devoted to humor and satire had been raised here.
In 1917 Gabrovo had 9500 citizens with 8 banks, 23 factories for cloths and yarns, 10 leather factories, 5 weaving ones and 5 shoe factories as well as many other smaller workshops. There have been 4 hotels and 12 coffee – shops, beer – houses and inns by that time. During 1939, nearing the war, 7 electricity stations and 108 big factories with more than 9000 workers had existed.
For the period 1905 – 1978, Gabrovo had been approved the most industrialized town in Bulgaria.
Industrialists from Gabrovo had remained in history as the first visionaries and innovators in the country. Pentcho Ivanov Semov – one of the pioneers till mid of C20 had been called “Bulgarian Rockfeller” and the “the most social industrialist on the Balkans” due to the donation activity he had in support of many public initiatives. Semov had been chief shareholder in 28 joint stock companies in Bulgaria, among which there have been three banks and two insurance companies.After his death on July 10th.,1945, he had left capitals to the amount of more than 1 milliard golden leva.
At present, by tradition, industry is still being a leading branch on the territory of Gabrovo Municipality, which is among the front economic centers in Bulgaria. Auspicious factors for its development are traditions, already built material base, the existence of technical university in town, as well as the qualified manpower.
Industrial profile at the moment is concentrated in machine-building production of tools and instruments for handwork; mechanical metal processing, metal constructions and production of parts, hoist – building; textile and knitwear; leather and shoe articles; rubber and plastic manufacture – cosmetic packaging , pharmaceutics and medical ones, preforms and beverage bottles, plastic discs for finishers; high technological output and services – the sector of information technologies, production of electric engines, generators and transformers. Companies with greatest number of personnel are operating in manufacturing and branches with biggest plants are metal output, without machines and equipment, clothing and textile.
During the last years, business activity in Gabrovo is crowned with success and many successfully realized projects with European financing, for a dynamic and competitive economics by innovation development, contraction, growing capacity, energetic and resource effectivity.