The Interactive Museum of Industry, Gabrovo is a part of the purposive efforts of Gabrovo Municipality for building up and development of cultural and historic tourist product and the infra-structure, connected to it.

Being with a free European financing, to the amount of more than 6 million leva, donated from the European fund for regional growth through Operative program ,,Regional Development” in the period 2012-2013, integrated investments had been made in the most attractive and popular national objects of cultural and historic heritage – AEC ,,Etara”, AIR – ,,Bojentsi” and ,,Dechkova House”. Also the building of the Regional Historic Museum had been turned into an innovative and dynamic museum attraction, revealing the growth of Gabrovo as an industrial center.

In parallel with the project for building reconstruction and delivery of technological equipment, 15 young men and women from Gabrovo had passed through specialization courses in the professions of a ,,Guide” and ,,Tourist animator” that created the resource of a qualified museum personnel.

The Interactive Museum of Industry Gabrovo was officially opened on March 21st, 2014 with a thematic conference, authentic performances from the almanac, a tour in the museum and a 3D projection on the facade which marked the successful end of the integrated project for development of cultural and historic tourist product, as well as the infra-structure connected. 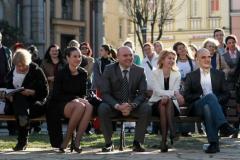 ,,Investment for the Interactive Museum of Industry is very important, made with big efforts and labor. What could be seen here will really impress visitors, since it’s original by its character”, was the comment of Mrs. Tanya Hristova , mayor of Gabrovo.

,,The building offers an attractive story for Gabrovo and its growth into an industrial center. My hope is that Gabrovo citizens and guests of the town will appreciate and keep the realization of the project, so that in long terms it will increase the tourist stream. I hope that tourism is a leading world industry, which guarantees income, work places and achievement of stable development of the regions”, said Mrs. Hristova further in her speech at the opening day of the museum.