The building of the Interactive Museum of Industry Gabrovo had been claimed an immovable cultural value of local meaning during 1986.
Built in 1893 for a family house and office of a Gabrovo native tradesman Tsanko Dobrev, later in the middle of twenties of C20, it had been bought by Bulgarian Trading Bank. After that it is nationalized from the City Council.
The building had been used by the historic museum for the period 1949 – 2003. After that until 2013 it remains uninhabited. 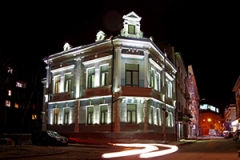 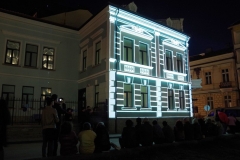 In its original shape, the house had been at three floors, with a half – massive construction. Its facade outlook is rich in characteristic details and ornaments from stamped lead tin, probably similar to the other buildings in the central part of the town, which had been made in Austria. In 1949 it suffers big changes, also constructive ones. In 1979 a partial reconstruction had been made, which had not introduced significant changes. The building had been totally reconstructed in 2013 under the frame of Integrated Project for Development of cultural and historic tourist product and the infra – structure of Gabrovo Municipality, linked to it; financed with European funds in relation to Operational Program for Regional Development. Reconstruction had been made to a maximum proximity to the original, but it led to an entirely new functional and constructive decision of space, framed by existing walls and the roof.

Renewed museum has an entirely reconstructed architectural vision as its 120 years old characteristic distinctive marks and aesthetics are preserved. New interior decisions had been introduced, in accordance with the specifics of museum exposures shown.
Building, as a whole, represents a revived cultural and historical heritage, assembling past, present and future times in one.
In 2014 the Interactive Museum of Industry is given a special prize in the competition for a “Building of the Year” due to its contribution in development of cultural and historical heritage as well as the innovative way of historical presentation of the industry of Gabrovo. Competition had been held for the thirteenth time as its aim had been differentiation between ideas, originality and innovation decisions in the area of architecture. Big prize winner and winners in different categories had been nominated by a jury of distinguished Bulgarian and international professionals in the area of architecture, investments, city – planning and business. 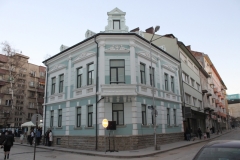 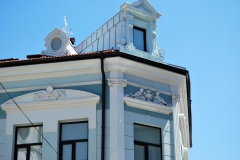 Competition had been organized by “The City Media Group” under the patronage of Ministry of Regional Development, with the support of branch organizations in the area of architecture, projection and building and the media partnership of the Bulgarian National Television. A prizing ceremony had taken place on December 10th, 2014 at the “Sofia Event Centre” in the capital.